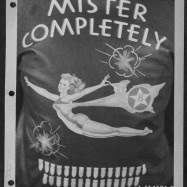 Bomber crews during World War II not only decorated the nose of their aircraft ("nose art"), they also decorated their jackets.  The Jalopy Journal posted a series of photos from late in the war documenting the jacket designs.  As with some nose art, pretty girls feature prominently.  Bear in mind that bomber crews were males mostly between the ages of 18 and 23, a long way from home, and risking their lives every mission.  By today's standards, only one of the images is even the slightest bit risque, but no more than a PG rating.  My personal favorite is this one.  The design is a copy of a well known pin-up from one of the major artists whose name escapes me, but the name is the key.  What better name for a plane that has to fly through enemy anti-aircraft and fighters than "Mister Completely?"
Posted by Tim at 2:30 PM