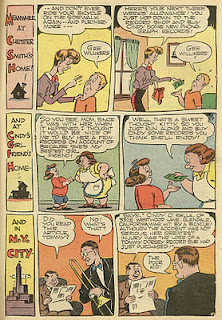 I tend to prefer action comics over light humor, but this posting on Four Color Shadows caught my eye.  Apparently, Cindy was a comics character in the late 1940s.  In this issue, she is hit by a boy riding a bicycle as she walked out of a music store with her new Tommy Dorsey record.  The record is broken, which upsets Cindy far more than the slight physical injury.  When the story of her broken record makes the paper, Tommy Dorsey himself sends her a copy of every record he ever made.  TD appears in the last two panels on this page.
Posted by Tim at 3:00 PM