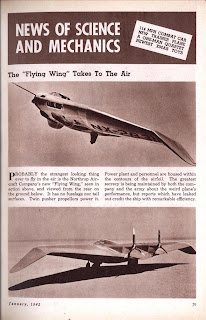 Jack Northrop built a series of "Flying Wing" aircraft in the late '30s and early '40s.  Although they never went into military or commercial service, they did provide much of the groundwork for what eventually became the B-2 stealth bomber.  Modern Mechanix posted this article from the January 1942 issue of Mechanix Illustrated about one of Northrop Aircraft Company's prototypes.
Posted by Tim at 3:00 PM