To celebrate All Hallow's Eve (or Samhain, if you are of the Celtic persuasion), here is Casper the Friendly Ghost in the 1948 animated short, There's Good Boos Tonight, from the Internet Archive.

Boing Boing recently posted about this 1934 Modern Mechanix article discussing a Depression-era variation on chess that apparently pits the workers against the capitalists.   The original article describes the game as


a newly simplified form of the game of chess [that] has for its game board the Modern World, and for its pieces Farmers, Mechanics, Engineers and even Agitators struggling against forces symbolized by opposing Armies, Bankers, Radio, Press, Law and Middlemen trying to become Bankers.

This week's session at the Rumba Room features Trolley Tour Band Night with Jeremy Shrader's Quintessentials, plus a Halloween Costume Contest.  All participants will receive a prize, and best costume gets a 3 CD set of big band music.

Dress like you are going out, or on this occasion, in your best Halloween costume!

Turner Classic Movies starts its pre-Halloween programming with 14 hours of Boris Karloff on Friday.  Beginning at 5:00 a.m. Central, TCM will air 11 movies featuring the well-spoken master of spooky in classic Hollywood horror style.  I have not seen any of these, but the descriptions alone are enough to get you in the spirit.  Watch for Myrna Loy of The Thin Man movies in The Mask of Fu Manchu, in which she played Fah Lo See.

11:30am The Man They Could Not Hang (1939) A mad scientist uses an artificial heart pump he invented to seek revenge after he is executed.  Cast: Boris Karloff, Lorna Gray, Robert Wilcox, Roger Pryor Dir: Nick Grinde BW-64 mins, TV-14

5:45pm Isle Of The Dead (1945) The inhabitants of a Balkans island under quarantine fear that one of their number is a vampire.  Cast: Boris Karloff, Ellen Drew, Marc Cramer, Katherine Emery Dir: Mark Robson BW-72 mins, TV-PG
Posted by Tim at 8:15 AM No comments: 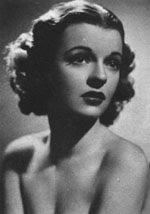 I just discovered Solid!, an online encyclopedia of big band and classic jazz, featuring biographies of jazz artists from the 19-teens through the 60's.  It appears the site may not have been updated in several years, but the information that is already there makes very interesting browsing.  For example, in the mid-1930's, the young lady at left was a vocalist for the Anson Weeks' orchestra, which at one time or another included Bob Crosby and Xavier Cugat; and backed Bob's brother Bing Crosby on one of his earliest hits.  She went on to Hollywood and the movies, where she changed her style a bit by donning a cowboy hat eventually marrying the King of the Cowboys.  Yes, folks.  That is Dale Evans in her pre-cowgirl days.

Although I have seen Little Lulu as a comic strip character, I have never seen her animated, so this cartoon was a first for me. From the Internet Archive, the 1946 animated short, Little Lulu in Bored of Education. 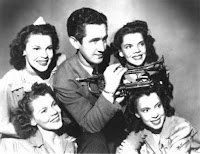 I saw this item in the October 21, 2009 edition of the The Commercial Appeal:  a photo of Clyde McCoy, big band leader and composer of Sugar Blues, surrounded by the female vocal group that accompanied his band, the Bennett Sisters.  According to the article, McCoy's band often played the Peabody Hotel Skyway, and all of the Sisters lived in Memphis.  McCoy and his wife, Maxine of the Bennett Sisters, eventually retired to Memphis in the 1970s.

In addition to the regular weekly Red Hot Lindy Hop dance lesson and session at the Rumba Room this Friday night, there are some other "hopportunities" for those so inclined.

Next Friday, October 30, 2009 - The regular hop features Trolley Tour Band Night with Jeremy Shrader's Quintessentials, plus a Halloween Costume Contest.  All participants will receive a prize, and best costume gets a 3 CD set of big band music. 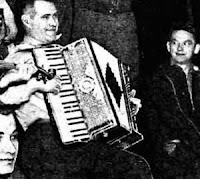 At Vintage Projects, I found an interesting 1943 Popular Mechanics article about employers using music to increase their workers' morale and productivity.  A variety of different industries tried the experiment, from laundries to shipyards, featuring both live and recorded music.  I especially like the caption under one photo of two female employees putting slips of paper in the Music Request Box:  "Some like it sweet, some like it hot - both get their wish."

Sorry folks!  Keeping with my little tradition of cartoons on a Saturday morning, this post was supposed to publish two days ago, but technical issues and other distractions prevailed.  Better late than never.  It's time for another Betty Boop short from the Internet Archive. This 1939 cartoon features the later, taller, more slender version of Ms. Boop, with a canine sidekick called Pudgy. Here they are in The Scared Crows.

How Detroit Won the War 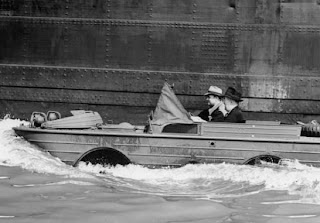 I once heard a theory that four machines won World War II, and they were not fighters, bombers, battleships, tanks, guns or any other machine designed to actually "fight."  They were the workhorses:  the bulldozer, the GMC 2 1/2 ton truck, the landing craft, and the C-47 transport aircraft.

Boing Boing just posted a link to a gallery of photos on the Life magazine site called How Detroit Won the War that reveals the industrial muscle that cranked out millions of these machines.
Posted by Tim at 3:20 PM No comments:

I have become a fan of movie serials; those short films that told a story over 12-15 episodes, with each invariably ending with the hero/heroine/sidekick facing such imminent peril that the audience was compelled to return to the theater the following week to see how/if he/she survived.  Turner Classic Movies has been airing serial episodes on Saturday mornings, with Dick Tracy being the most recent.  DVD collections of serials are widely available, and the Internet Archive has several in its collection.  While strolling through the internet today, I discovered another interesting resource on the subject:  Todd Gault's Serial Experience.  This site has a massive amount of information about this genre, over ten years of articles, and a blog.  If you have any interest in serials or classic movies, you should check it out.

Red Hot Lindy Hop presents Joel Plys and Evita Arce for a Lindy Hop Workshop in Memphis on November 14 and 15.  Cost $50 until October 15, with discounts for students.  See full schedule and register at redhotlindyhop.com.

Don't forget the weekly hop session at the Rumba Room.

Now here is a soundie I can really dig: Swing Shift Swing.

While ambling around the web, I stumbled across Steven Hill's Movie Title Screens Page, which (as its name implies) is simply a collection of motion picture title shots.  I estimated well over a hundred screens just in the 1950's section, and they cover over a century of movie making.  Any movie buff should find this site interesting.

Plus, Red Hot Lindy Hop presents Joel Plys and Evita Arce for a Lindy Hop Workshop in Memphis on November 14 and 15.  Cost $50 until October 15, with discounts for students.  See full schedule and register at redhotlindyhop.com.

There is a nice selection of some excellent films on Turner Classic Movies this week.  I have seen all of them except All Through the Night, but with Bogey and Casablanca co-stars Conrad Veidt and Peter Lorre, plus Jackie Gleason and Phil Silvers, it should be good.  The others are undeniably great.  All times Central.

What a great Jack-O-Lantern this would make.  In 1938, Modern Mechanix did an item about a farmer who grew custom pumpkins shaped like human faces.  This trick is still around, and you can buy molds to place around various types of produce so they grow into different shapes.  It may be too late to grow yourself a personalized pumpkin for this Halloween, but you can make a note for next year.  As seen on Make.
Posted by Tim at 8:00 AM No comments:

Today we have a 1943 Bob Clampett classic featuring the Rabbit himself, Bugs Bunny, in Falling Hare from the Internet Archive.

Photos from the Golden Age of Jazz

Another great collection in the Library of Congress American Memory site is the William P. Gottlieb Photographs from the Golden Age of Jazz.  This collection has over 1600 photographs of celebrated jazz artists and the jazz scene for the decade from 1938 to 1948.  There are some really neat pictures at this site, including the King of Gypsy Swing,  Django Reinhardt.