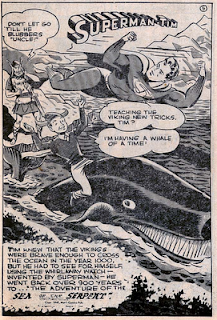 Why doesn't somebody tell me these things?  Four Color Shadows posted a scan of a Superman-Tim comic book from 1947, and linked to an article on Dial B For Blog which describes the origins of the "Tim" series of comics.  This is a concept I can appreciate.  It appears that my boyhood adventures with the Man of Steel were apparently erased from my memory, no doubt by some evil fiend bent on the destruction of truth, justice and the American way.  As Dial B explained,


Way back in 1942, a company called Tim Publications, Inc. used to print small, 6" x 9" booklets in black with a single color. These booklets were issued monthly, and the stores that sold them created “clubs” for younger kids.

The club you belonged to depended on how old you were. Older children had the “Tim in Space” club and the "Gene Autry-Tim" club, while younger kids had the "Superman-Tim" club, and its companion comic book: Superman-Tim comics.