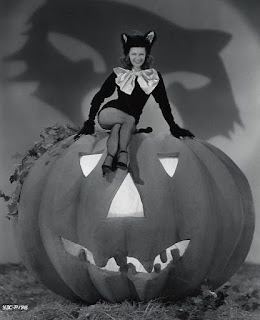 Happy Halloween from Yvonne DeCarlo, courtesy of Film Noir Photos.  Considering that one of Ms. DeCarlo's most famous roles later in life was Lily Munster in The Munsters, this image from earlier in her career seemed even more appropriate for Halloween.
Posted by Tim at 3:00 PM No comments:

Today's Sunrise Serenade was "New East St. Louis Toodle-Oo" by Duke Ellington and His Orchestra.  Click on the song title to listen courtesy of Jazz On Line.
Posted by Tim at 8:57 AM No comments:

This morning's Sunrise Serenade was "Jeepers Creepers" by Louis Armstrong.  Click on the song title to listen courtesy of Jazz On Line.
Posted by Tim at 8:51 AM No comments:

Sunrise Serenade: It's A Sin To Tell A Lie

This morning's Sunrise Serenade was "It's A Sin To Tell A Lie" by Fats Waller and His Rhythm.  Click on the song title to listen courtesy of Jazz On Line.
Posted by Tim at 11:18 AM No comments:

Streamline recently reviewed the 1939 version of Raffles, the story of an upper class cricket player, A.J. Raffles, whose nighttime persona is "The Amateur Cracksman," a brilliant jewel thief.  In the title role, David Niven manages to play cricket, hit all the high society parties, steal jewels, elude the police and give away the loot to those who need help.  The 1930 version of the same film starred Ronald Coleman in the same role.  I have seen both films, and both are enjoyable.
Posted by Tim at 3:00 PM No comments:

Today's Sunrise Serenade was "Yes Indeed" by Tommy Dorsey and His Orchestra with Jo Stafford and Sy Oliver on vocals.  Click on the song title to listen courtesy of Jazz On Line.
Posted by Tim at 8:45 AM No comments:

The playlist for the October 25, 2017 broadcast of the Swing Shift Shuffle has now been added to the playlist filing cabinet.
Posted by Tim at 8:00 PM No comments:

Well, this is what I get for not paying attention.  I just found out that the 2017 Jimmie Lunceford Jamboree Festival is going on right now through October 29.  There are events going on every night this week, including art shows, lectures, jam sessions and movies all over town celebrating one of the biggest musical talents to come out of Memphis.  Check out the site and see if you can join in the fun.
Posted by Tim at 3:15 PM No comments:

This morning's Sunrise Serenade was "Anvil Chorus" by Glenn Miller and His Orchestra.  Click on the song title to listen courtesy of Jazz On Line.
Posted by Tim at 10:31 AM No comments:

Live Music At The Lindy Hop

The Red Hot Lindy Hop lessons and sessions continue with live music by Will Lang at the Rumba Room this Friday night.  Free beginner lesson at 7:00 p.m.  Free admission before 7:00 p.m. and $5 thereafter.