The Eiffel Tower As An Automobile Advertisement 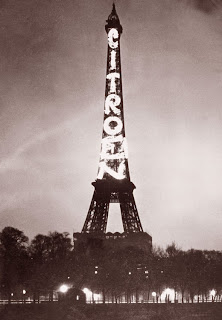 I'll bet that if you picture the Eiffel Tower in your mind, it will not look like this photo.  Retronaut posted several pictures of the Paris landmark when it served as an advertisement for Citroen motorcars.  Apparently, the company rented the tower from 1925 to 1934, so for nearly nine years, the City of Light earned that name (at least in part) thanks to Citroen.
Posted by Tim at 3:00 PM