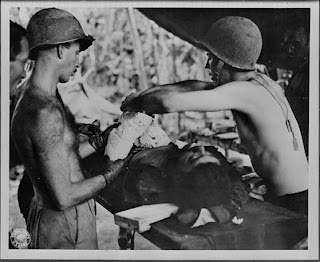 On Veterans' Day, one often sees photos or images of military personnel in dress uniforms, in parades, etc.  I came across this photo from the Library of Congress American Memory collection:  Depression Era to World War II.  According to the caption, it depicts an operation on a wounded American soldier by Major George Marks. The soldier was wounded in the arms and shoulders by shrapnel from a Japanese mortar as he was storming a pillbox in New Guinea in 1944.  This picture reflects the realities of why we have Veterans' Day.
Posted by Tim at 3:06 PM