On the other end of the three wheel vehicle spectrum from the little Morgan trike was Buckminster Fuller's Dymaxion car.  Boing Boing posted that a British architect has commissioned his own. 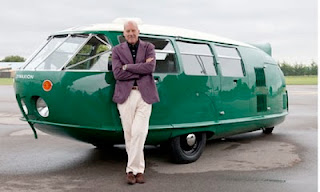 In 1933, Buckminster Fuller designed the Dymaxion car, a concept vehicle that could hold 11 passengers and had a fuel efficiency of 30+ miles per gallon. Three prototypes were built, but the only survivor is in the National Automobile Museum in Reno, Nevada. Recently though, renowned UK architect Norman Foster, one of Fuller's colleagues late in his life, commissioned construction of his own Dymaxion car.