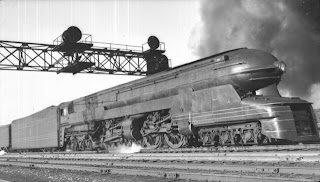 This past November 5 would have been Raymond Loewy's 120th birthday, and as a post on Gizmodo noted, he was justifiably considered the man who made the 20th century beautiful.  From trains, planes and automobiles to graphic design and space exploration, Loewy was a designer to tried his hand, quite successfully, at designing everything.  The above Art Deco steam locomotive is his design, as was the Coke bottle.
Posted by Tim at 2:30 PM