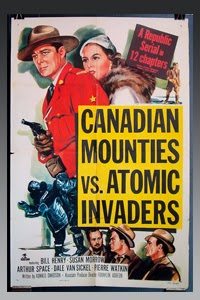 While I was off on the annual SSS holiday shutdown, I discovered a new TV channel in the Memphis area.  Well, at least it is new to me, and I think I would have noticed it before.  Broadcast on digital channel 23.2 in Memphis; channel 34.1 in Senatobia, MS; channel 15 on Comcast Cable, and channel 34 on Uverse, it is called Acmeclassics.com.  Its programming consists of old movies, movie serials, newsreels, cartoons, and TV shows, many of which are public domain.  As far as I have observed, the programs are broadcast without commercial interruption.  The commercials and public service announcements appear in between the shows.  The variety has been impressive.  I have seen Betty Boop, Noveltoon and Private Snafu cartoons, Pathe newsreels, early 1930's movies, classic TV shows like The Cisco Kid, Bonanza  and The Andy Griffith Show, as well as some British TV shows from the 1960s.  Movie serials are a regular part of the programming as well.  I have been thoroughly enjoying it.  The schedule is best found at the website, since the programs can begin at any time during the hour (e.g. 9:13 start time).  My only note of caution is that, on Uverse at least, the online guide is one hour ahead of the programming.  If you push "INFO" while on the Uverse channel guide, you will probably get information on the show that will air one hour from now.