Myrna Loy In A Suit 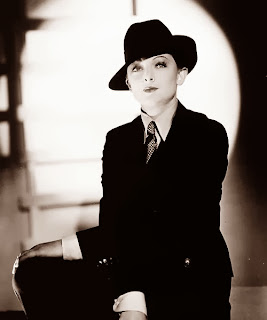 Film Noir Photos posted this apparent publicity shot of Myrna Loy for the 1934 film, The Thin Man, the first of the Thin Man series starring William Powell as Nick Charles and Loy as Nora.  That being said, I have seen The Thin Man numerous times, and Myrna Loy never appears in a suit in the film.  Perhaps this shot was just a teaser.
Posted by Tim at 3:00 PM