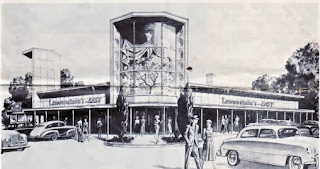 Here is a neat little snapshot of Memphis memories from Ask Vance.  In 1949, Lowenstein's, which along with Goldsmith's, constituted the main home-grown department store industry in Memphis; opened "Lowenstein's East" at the corner of Poplar Avenue and Highland Street.  Now considered the edge of Midtown Memphis, the building, with its giant display gallery over the main entrance, houses a SpinStreet Records and a PetCo.  I remember when it was Lowenstein's, and Christmas decorations would appear in that gallery during the holidays.  As for Goldsmith's, it was eventually purchased by Macy's, which has several stores in the Memphis area.
Posted by Tim at 3:00 PM