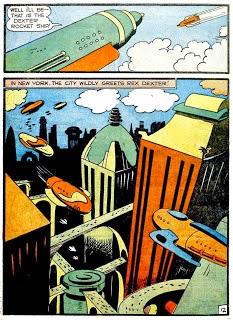 Rex Dexter of Mars returns!  I posted a Rex Dexter story back in July 2012, and today I came across what is essentially his origin story, posted on Pappy's Golden Age Comics Blogzine.  It seems that Rex' great grandfather, his wife and a few other scientists were so fed up with strife and war on Earth in 1939 that they left the planet to start a new life on Mars.  Blasting off from the 1939 World's Fair (where else?), the Dexters settled on Mars.  Great Granddad had a plan, however, and he left instructions for his descedents to return to Earth in the year 2040 to report on the progress of the Mars experiment.  Rex and his girlfriend faithfully carry out their predecessor's orders to find a modern Utopia on Earth, where everyone works only because they want to, machines do the "menial labor," and city buses are free!  We better hurry up, we only have about 26 years to get there.
Posted by Tim at 3:00 PM