75th Anniversary Of Orson Welles' War Of The Worlds Broadcast 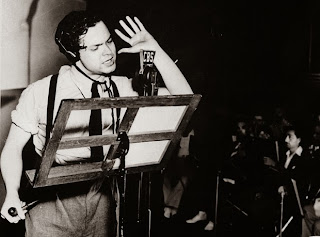 Seventy-five years ago today, on Sunday, October 30, 1938, a young actor named Orson Welles broadcast a Halloween episode of the CBS radio drama The Mercury Theatre on the Air based on H.G. Wells' novel, The War of the Worlds.  Adapting the novel to the time, the broadcast opened as a series of radio news alerts reporting something strange happening in New Jersey.  The rest is history.  Although traditional urban lore suggests that the broadcast caused mass panic among radio listeners who thought the portrayed events were real, historians have cast significant doubt on those claims, indicating that press reports of panic at the time were exaggerated.
Posted by Tim at 2:30 PM