There is an interesting post on Movie Morlocks, the official Turner Classic Movies blog, summarizing the contents of some 1940's movie magazines.  In addition to Hollywood gossip, these articles provide insight into some of the everyday considerations on the home front.  For example, Victory Gardens: 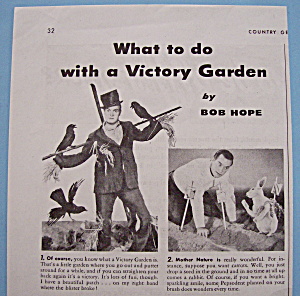 According to Photoplay, Janet Gaynor had the most elaborate garden, because she owned a farm. Everything on her table came from her farm, including the milk, which came from her goats. Gaynor’s garden may have been extensive, but Deanna Durbin’s beets were so big she had “to dig them up with a shovel.” On the other end of the spectrum, Ann Sothern knew little about living on a farm or gardening. She planted her corn in a single row, which meant it did not cross-pollinate. As a result, there were no ears on her corn.