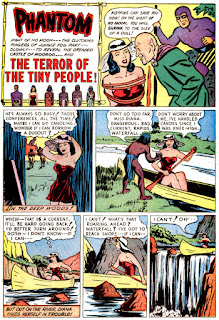 As noted by Pappy's Golden Age Comics Blogzine, the Phantom has been a very popular comic character for many years and in many countries, even if he is not as well known today in the U.S.  Still, he appeared in newspaper comic strips, comic books, a movie serial 1943, and even in a major feature film in 1996.  Pappy posted this Phantom story from 1951.
Posted by Tim at 3:00 PM