Marlene Dietrich - No Highway In The Sky 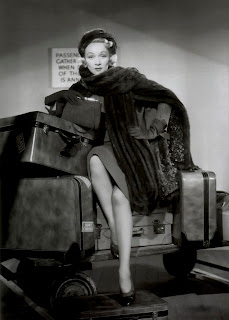 Here is a set of publicity photos of Marlene Dietrich, posted on Vintage Everyday, taken during the filming of No Highway In The Sky in 1948.  One of my favorite films, in addition to Ms. Dietrich it starred James Stewart, Jack Hawkins and Glynis Johns.  Ms. Dietrich played a glamorous movie star (typecasting?) who becomes intrigued by a sincere but eccentric aviation engineer played by Stewart, who believes the aircraft in which they travel will crash at a specific time.
Posted by Tim at 3:00 PM