I'm adding a new series to the blog:  Finds.  Occasionally, I get the chance to hit the odd antique store, estate sale or flea market.  Whether I buy anything or not, I often see some pretty interesting items from the Swing Era, and I often learn something new when I do.  Case in point:  this 1940 RCA Victrola Wireless Record Player I found last month at the Nashville Flea Market.  Yes, you read that correctly - "Wireless" record player.  This unit has no speakers, and other than a power cord, no cables or cords to connect it to any other device.  How do you hear the music?  This device sends the audio from the record, via its own internal radio transmitter, to any nearby AM radio tuned to that frequency.  Yes, well before Bluetooth and Mr. Microphone, folks could hear their music transmitted wirelessly from one device to another.  Prior to finding this item, I had no clue that such things existed.  Apparently they were manufactured by several companies from 1939 to 1942. 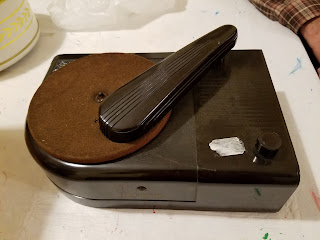 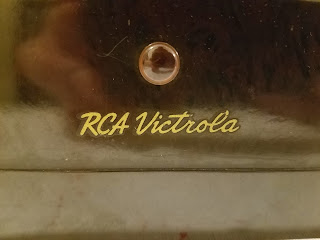 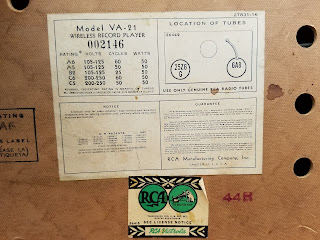 P.S. - If you're wondering what happened to it, I bought it on behalf of a friend of mine who restores antique radios.  Of course, he knew exactly what it was, and it has found a good home.
Posted by Tim at 3:32 PM