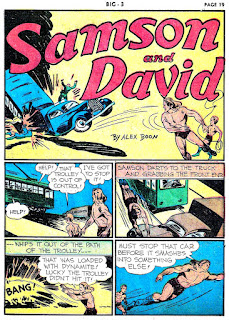 I have seen and posted about a wide variety of comic heroes, with an equally wide variety of origins, but as far as I can remember, this is the first time I found a hero (or rather two) based on the Bible.  Like his Old Testament namesake, this Samson is super strong, and his power lies in his long hair.  Unlike his biblical counterpart, however, this Samson can fly, and regrow his hair at will.  Posted on Pappy's Golden Age Comics Blogzine, here is a 1941 issue of Samson and David, fighting Nazis before the U.S. was even in the war.