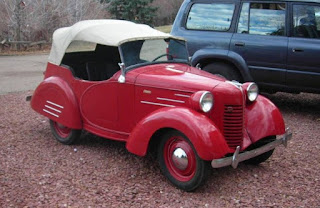 A week or so ago, the Hemming﻿s blog featured one of my favorite little cars as the Find of the Day (in other words, a good deal for sale in the pages of Hemmings Motor News): a 1939 American Bantam Speedster.  Bantams were successors to the American Austin, which was basically a British Austin built in Pennsylvania for sale in the U.S.  American Austin went into receivership, but was resurrected with new designs as the Bantam.  Dwarfed by other American cars of the day, these efficient and fun little cars never really caught on.  Bantam's lasting claim to fame was that its design for a lightweight, general purpose vehicle for the U.S. Army was the basis for what became known as the "jeep."
Posted by Tim at 3:00 PM