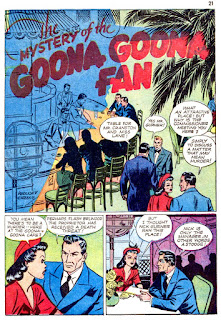 I do not remember ever posting an actual Shadow comic book before, so here you go. Pappy's Golden Age Comics Blogzine posted this issue from 1942.  As Pappy's noted, the "Fan" in the title actually refers to an electric fan, not a "fanatic" or enthusiast.  The "Goona Goona" is the name of the nightclub.  Curious about the name, I did a little research.  It seems the term "goona goona" was a Hollywood phrase meaning a certain type of movie.  Specifically, it was a film set in remote parts of the Far East, Southeast Asia, South Pacific, Africa or South America, usually involving stock footage scenes of natives supposedly engaged in exotic rituals.  The words came from the title of such a film released in 1932, Goona-Goona, An Authentic Melodrama of the Island of Bali.
Posted by Tim at 2:30 PM