Living and driving in the South, it is obvious why air conditioning did not remain merely an "option" on cars sold in the region for long.  Simply put, it is not optional, but mandatory for automotive travel during Southern summers, which essentially start in May and last until late September.  Such luxury was not "standard" in the 1940's, however, and the Hemmings blog notes that the 1940 Packard 180 pioneered the way for climate controlled comfort. 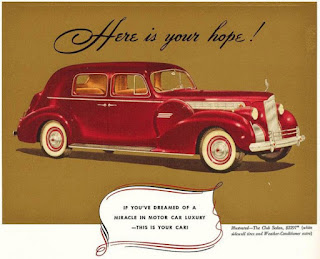 Air-conditioned cars are a relatively recent innovation. Seventy-something years ago, production automotive air conditioning was called mechanical refrigeration. The car that made driving with the windows up on a hot day cool was the 1940 Packard 180. The mechanical refrigeration unit automatically switched to heating in winter, and as such was dubbed not an air conditioner, but rather a Weather Conditioner. The factory-installed technological triumph cooled, heated, dehumidified, and even filtered cabin air from pollen and dust and other unwanted weather-related items.