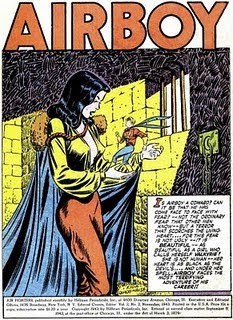 On Pappy's Golden Age Comics Blogzine, I found this 1943 comic book featuring Airboy and Valkyrie.  During World War II, Airboy was a comic book boy hero who battled the Axis in his flapping flying machine - "Birdie."  His greatest enemy was Valkyrie, a beautiful female Nazi flyer who eventually saw the error of her ways and defected to the Allies.  The Golden Age of Comics:  when good guys were good guys, and bad guys were gorgeous babes who eventually fell in love with the good guys.
Posted by Tim at 8:10 AM