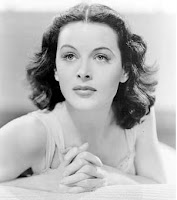 Widely regarded as the most beautiful woman to ever appear on film, Hedy Lamarr also helped develop "frequency hopping," which eventually became the basis for the U.S. military satelite defense system, as well as mobile telephone technology. Boing Boing has a post with a link to the full article. WARNING: The full article should probably have a PG rating due to one still photograph from some of Hedy's early film work in Europe.
Posted by Tim at 3:13 PM

Incredible! I never knew thia about her.