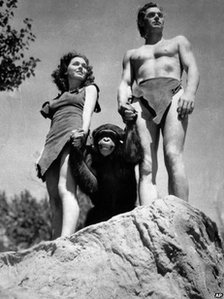 One of the chimpanzees who played "Cheetah" in some of the Tarzan movies of the 1930s died on Saturday at the unbelievable (for a chimp) age of 80.  The Tampa Tribune reported that the Suncoast Primate Sanctuary in Palm Harbor, Florida received Cheetah around 1960 from the estate of Johnny Weissmuller, who played the title role in the Tarzan franchise from 1932 well into the 1940s.  There is little doubt that, throughout the run of those movies, the studios used more than one chimp to play the role of Cheetah.  According to the article, this Cheetah starred in some of the earliest Tarzan movies like Tarzan The Ape Man and Tarzan and His Mate alongside Weissmuller and the original "Jane," Maureen O'Sullivan.
Posted by Tim at 2:30 PM