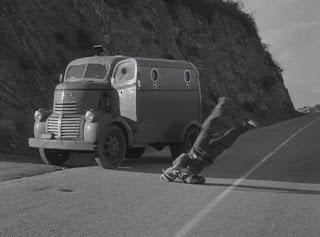 Speaking of Batman, here is the first Batmobile on film.  Now that is a crime fighting vehicle!  The Hemmings blog did a little movie carspotting (or in this case truckspotting) to identify this Batmobile from the 1943 and 1949 serials as a  1 1/2 ton GM (either Chevrolet or GMC) cab-over-engine truck produced sometime between 1941-1947.  It has a much more imposing screen presence than some flimsy sports coupe.
Posted by Tim at 3:00 PM