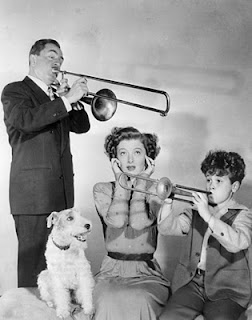 Film Noir Photos began a series featuring photos and posters from movies with multiple sequels, and it began with The Thin Man series starring William Powell as Nick Charles, Myrna Loy as his wife Nora, and Asta, their wired-haired terrier.
This publicity shot is from the last of the series, Song of the Thin Man (1947), with Powell, Loy and Dean Stockwell (Dune, Quantum Leap, Battlestar Galactica) as Nicky, Jr.  Like Film Noir, I agree that this film was the weakest in the series, but I too have a soft spot for this movie.  One of the funniest moments in film is when the beautiful Myrna Loy says "I'm a mudhen."
Posted by Tim at 3:30 PM