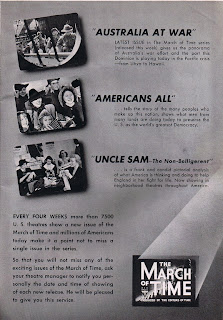 I never thought about advertisements for documentaries or newsreels until I saw this image from Vintage Ads.  It is an ad for a 1939 episode from the March Of Time series.  Before the Pearl Harbor attack on December 7, 1941, and less than a generation after World War I, many Americans were not interested in another war, and the subjects for this film seem to suggest that position.
Posted by Tim at 2:45 PM