Behind The Scenes Of Metropolis 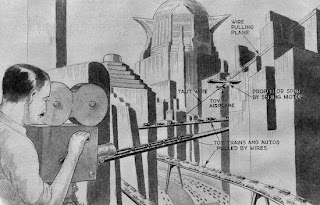 And I am not talking about Superman's hangout.  This Metropolis was the 1927 cinematic masterpiece by German director Fritz Lang.  Yes, I know that 1927 was just a little before the Swing Era really began in earnest, but the imagery in Metropolis was an example of Art Deco design that truly flourished in the 1930's.  Besides, it is one of my favorite films, so there!  Paleofuture posted an article from the June 1927 issue of Science and Invention that reveals the science used to produce the film's still impressive special effects.
Posted by Tim at 2:30 PM