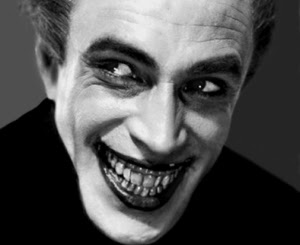 To most Americans, he was the Nazi major shot by Humphrey Bogart in the final scenes of Casablanca; but after reading the brief biography of Conrad Veidt posted on MovieFanFare, you will learn a great deal about this versatile actor and courageous man.  One of the most outspoken critics of the Nazi regime, during the war, Veidt donated almost all of his salary to support the British war effort.  One of his greatest roles was as the murderous sleepwalker (photo) in The Cabinet of Dr. Caligari (1920).
Posted by Tim at 5:18 PM

The Cabinet of Dr Caligari is delicious silent horror fare. I had read that Mr. Veidt was an ardent anti-Nazi but I had no idea that he was in this silent movie... how fun. You know, if an actor makes you loath his character, that if great acting...hahaha. What a treasure.