Never Before Published Story From December 14, 1941 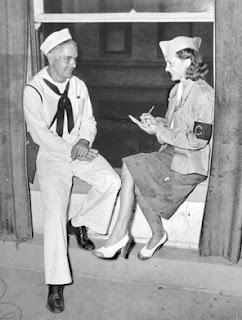 Today is the 71st anniversary of the attack on Pearl Harbor that brought the U.S. into World War II.  Today's Washington Post carried a story written by Elizabeth P. McIntosh, a reporter for the Hono­lulu Star-Bulletin, on December 14, 1941, after seven days of war.  Her editors thought it was too graphic, and it was never published until now.  This first person account of that time is a chilling and fascinating literary time capsule:


Then, from the neighborhood called Punchbowl, I saw a formation of black planes diving straight into the ocean off Pearl Harbor. The blue sky was punctured with anti-aircraft smoke puffs. Suddenly, there was a sharp whistling sound, almost over my shoulder, and below, down on School Street. I saw a rooftop fly into the air like a pasteboard movie set.

For the first time, I felt that numb terror that all of London has known for months. It is the terror of not being able to do anything but fall on your stomach and hope the bomb won’t land on you. It’s the helplessness and terror of sudden visions of a ripping sensation in your back, shrapnel coursing through your chest, total blackness, maybe death.